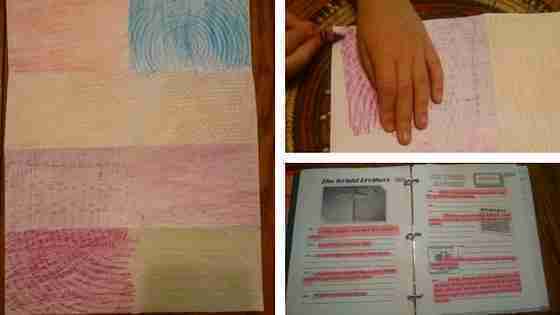 This week in Heart of Dakota’s Bigger Hearts for His Glory we continued learning about the Wright Brothers (and their sister).   We read how they worked together to make their own lathe, they started a printing business, and then they opened a bicycle shop.  Finally, the brothers became interested in flying after reading about the death of a famous glider pilot in the newspaper.

Kevin added the new events about the Wright Brothers to his timeline notebook page. He also added it to his timeline he’s been keeping all year.  Art is not his strong point, but I’ve been encouraging him to do his best and not worry if the pictures aren’t perfect.  This might be harder for me than it is for him. In Geography, we studied about the Arctic and Polar regions.  We talked about icebergs and how only a small portion is visible above the water.  We observed how when you float ice cubes in water only a small portion of them shows on top of the water just like with the icebergs.  That’s why it’s so easy for ships to accidentally hit them.

In Science, we talked about shadows and what causes them.  We found out why shadows were longer in the evening as the sun is going down.  We did a simple experiment with an object and a flashlight to show how you can make different size shadows depending where you shine the light.

For Art, Kevin made a textured patchwork “quilt” using a piece of paper and different textures. 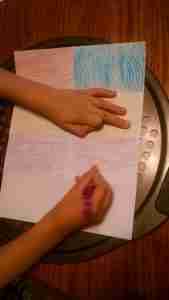 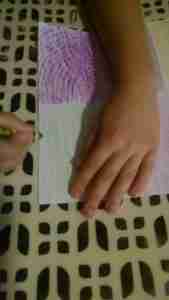 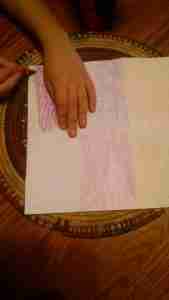 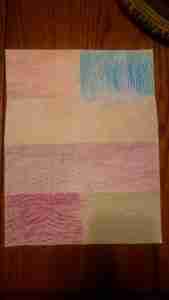 Our poem for the week was “What Makes a House a Home.”  The character trait was honesty and the Bible verse was Proverbs 12:22.

Kevin was sick part of this week, so we skipped some of the written work and did more things orally.  He really enjoys studying French with Duolingo so he spent quite a bit of time doing that when he didn’t feel well enough to do regular school work.

I’ve been feeling like my weekly updates aren’t very detailed lately, but we’ve had a lot going on.  We’re in the middle of a move right now so I hope things will settle down after we’re settled in, even though with just five weeks of school left maybe that won’t happen this year.

Thanks for reading!  How’s your school year going?  It can be hard to keep focused this time of year when it’s so nice out.