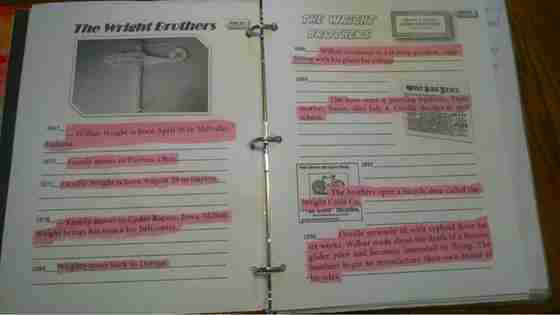 This week we started learning about William and Orville Wright and their sister using the book The Wright Brothers and Their Sister.  We read about their childhood and how from early on they loved to invent things.  We read about how they received a little toy helicopter from their dad as a gift one day and when it wore out, they used it as a model to make a new one that worked as well as the bought one.

At the end of the week we started a timeline chronicling the important events in the Wright Brothers’ lives.  The teacher’s guide gave the option of cutting out the text (instead of writing it) so I decided to go with this to save my son from so much writing.  He’s made a lot of progress in the past year, but I thought this much writing would be overwhelming for him. For Artistic Expression, Kevin made a card.  He cut out a shape from the front of the card and then glued a picture behind it so it would show through the cut-out.  Then he added a note inside and we sent it to his cousin who lives in a different state. In Science, we read about how the early settlers would judge if the land was good for farming by looking at the trees that grew there.  We also discussed what made popcorn pop.  We demonstrated with a plastic bag how pressure builds up inside when you press on it- just like pressure builds up inside a popcorn kernel when the water inside is turned to steam- until it eventually pops.  Then we had popcorn for a snack. Notebook page showing which land was good for farmland

The Wondrous Whirligig:  This book goes great with what we read about this week.  I was glad to find it at our library and am looking forward to reading it with my son.  (It didn’t come in yet, but I have it on hold.  I need to get better about reserving books earlier.)

My Brothers’ Flying Machine: I couldn’t find this book at our library, but it looks like a great book to add to this week.  It has beautiful illustrations and simple text told from the sister’s point of view. This week is going to be really short.  I think I’ll blame it on taxes.  Thanks for joining us!