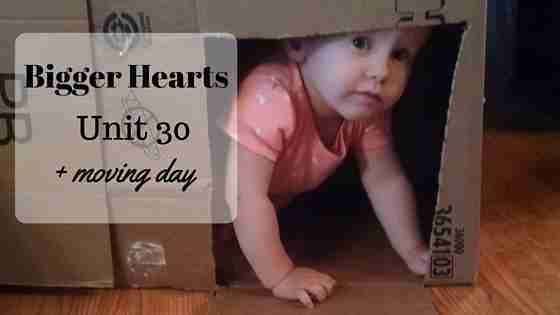 We just finished up Unit 30 in Heart of Dakota’s Bigger Hearts for His Glory.  We took a week off school last week because we were moving.  We’re now back in our own house which we moved out of nine years ago when we traveled overseas to West Africa as missionaries.  It feels good to be settled in for the first time in a long time. (We don’t have any plans of moving again soon anyway.)

It was fun to unpack things that haven’t been unpacked since we first left.  It was fun to see our boys excitement at the new house and new woods to explore.  This afternoon they’ve been exploring an old shed on the property and keep coming in with all sorts of questions.

Are the vintage coke bottles they found worth four dollars or four hundred dollars?

Is an old stand radio with missing parts worth anything?

And why does someone have a collection of forty newspapers all from the same date?  (And, no, vintage newspapers don’t seem to be worth anything unless they’re reporting the death of someone.)

And our little girl has settled right in with the familiar furniture and toys surrounding her.  And of course, with moving, who can resist making tunnels out of boxes

The chapter we read this week in A Pioneer Sampler was called Moving Day so it fit right in.  We read how the Robertson’s were finally able to build a new home and move in.  We talked about how their house and belongings are different from ours today.  We also studied how yeast worked and did a simple experiment with friction.

We also did some experiments relating to flight.  The boys really had fun trying to keep a cotton ball up in the air with a blow dryer.  We also did an activity demonstrating high and low air pressure.  The animals below are all in a high pressure area and will rush to the low pressure area as soon as the door is opened.

We studied one of my favorite poems this week- “Who Has Seen the Wind?“ by Christina Rosetti.  I like how the poems usually go along with the topic being studied.

We’re reading Understood Betsy for the realistic fiction genre we’re working on.  We are all enjoying it so much and there are so many good lessons in it.  The Storytime plans included a discussion on point of view and on integrity and how it relates to the characters in the story.

Rod and Staff English and Cheerful Cursive are going well and so is Singapore Math.  Kevin catches on quickly so Singapore Math has been good for him.  I’m already looking ahead to next year and am considering some exciting new math plans for him so we’ll see how that goes.