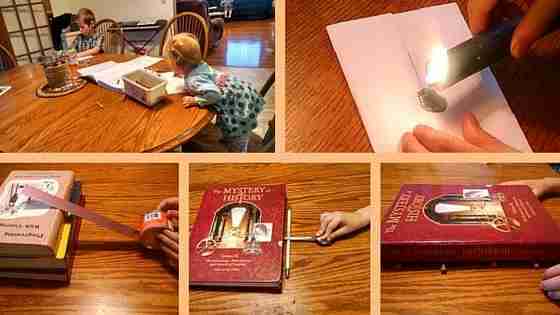 This week in Heart of Dakota’s Bigger Hearts for His Glory we learned about John Muir.  He was a Scottish naturalist who moved to the United States as a young boy and spent a lot of time exploring the wild untouched wildernesses of America.  We can be thankful to him for helping to establish the National Park System we have today.  I feel that helping our children develop a love of nature is so important so I’m glad we get to study men like him.

We read in Journeys in Time about a one thousand mile journey John Muir took by foot from Kentucky to the Gulf of Mexico to explore Eastern America.  Then Kevin chose a state he journeyed through and made an outline of it.  He then drew and colored some of the animals found in the state.  (Actually, I printed out a picture of the bobcat from the internet because he was having a difficult time with that drawing.) He also drew a picture of one of the now-extinct animals pictured on the map of John Muir’s journey. We also learned about the Chisholm trail and how the ranchers transferred their cattle up north so that they could make a greater profit.  A cow that would bring  four dollars in Texas could bring forty dollars in Chicago.  We learned how wolves and hail could cause stampedes and lead to loss of cattle.

For a fun history activity, Kevin pretended to herd cattle (popcorn) across the table and I tried to scatter them with “wolves” or drop “hail” on them. We ended up with quite a few casualties from frantic cattle rushing off the edge of the cliff (table top).

We also read about the Spanish American War and about Theodore Roosevelt and his Rough Riders.  And we read the sad story of an Italian immigrant, Rosa Cristoforo, in Journeys of Time.

In Science we learned about the postal system in pioneer days.  It was very different because the receiver of the letter had to pay the postage which was equal to half a days wages.  Sometimes they weren’t able to pick up the letter because they didn’t have enough the money needed.  We learned how the pioneers would make their own ink and how they would use wax to seal letters.

Using Wax to seal an envelope

Pressing a seal into the envelope

We also learned about simple machines and practiced moving around objects with rollers, levers, and ramps.

In Poetry we studied the poem “The Things I Prize” by Henry Van Dyke.  We talked about imagery and then Kevin drew a picture of the poem while I read it several times.

Little sister joins in the fun

The character trait of the week was bravery.  The memory verse was Proverbs 24:10 and the Bible connection was Joshua and Caleb.

We used the library again this week. As I mentioned before, Kevin loves these books.  These books usually have three different story paths.  In this book one of them is the story of an Italian immigrant, though it isn’t the same time period as Rosa Cristoforo in the history lesson. ( I skimmed through the book and noticed that out of the many endings, three ended in death: two were from disease and one from a bullet on a battlefield, but not much detail is given.)

One of the options in this book is to join a cattle drive so it ties in with the Chisholm trail.  (In keeping with the time period, there are a high number of untimely deaths, some from disease, accidents, and some also from gunshots so keep that in mind if choosing this book for your child. )

My children usually enjoy the Childhood of Famous Americans series so I was glad to find this book and the one on Theodore Roosevelt.

This is a short book with colorful pictures on Roosevelt and his band of Rough Riders.