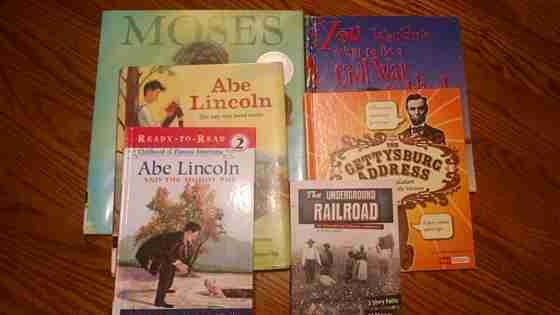 This week in Bigger Hearts for His Glory we learned about Abraham Lincoln and the Civil War. We also learned about the Underground Railroad and Harriet Tubman and others who helped runaway slaves make their way to freedom.

Journey’s in Time- The Underground Railroad We also added more cards to our flashcards on the states and practiced state abbreviations.  We also marked which states stayed in the Union and which seceded.  (I used different markings than the guide because I didn’t read carefully enough at the beginning. 🙂 ) For art, we practiced drawing stovepipe hats and logs. In Science we learned about harvest time in The Pioneer Sampler.  We read about how the pioneers used clouds to predict the weather.  We went outside and tried to make a prediction based on the clouds.  We were right.  It rained later in the day!

In Poetry we studied rhyming pattern and personification using the poem “God Bless Our Native Land.”

I was able to get a lot of great books from our library this week on the Civil War, Abraham Lincoln, and Harriet Tubman. Here are some books we checked out:

Moses: When Harriet Tubman Led Her People to Freedom

You Wouldn’t Want to Be a Civil War Soldier!

The Gettysburg Address in Translation

Abe Lincoln and the Muddy Pig Escape by Night: A Civil War Adventure  is another book about the Civil War that I highly recommend.  It is a a book about two kids and a dog who help a wounded soldier escape.

I’m sure there are many other great books about this time period available, but those are just a few that we found.

Our week was busy and actually broken up into three weeks because of traveling and vacation time, but we finally managed to get most of it done.  I hope you had a great week and thanks for stopping by!

This post may be linked up at one or more of these linkups.