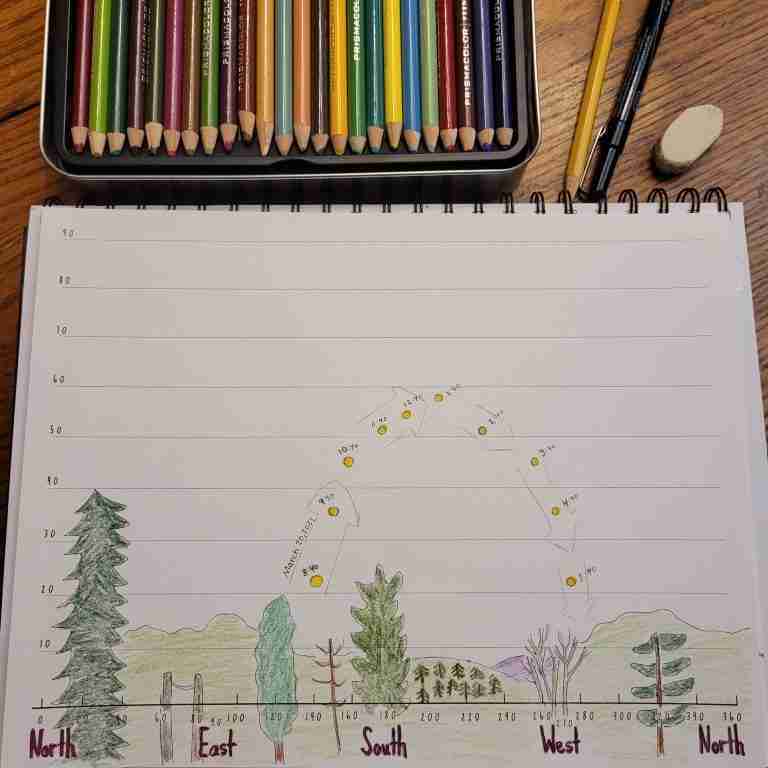 For an educational activity for the spring equinox, I’m going to show you how you can track the sun’s position throughout the day. I’m indebted to John Muir Laws’ for this sun and shadows equinox activity. He has a very informative article and video about this, but I thought I’d try to break it down a bit simpler. The activity was originally written for the autumn equinox, but it would be good for any equinox, solstice, or any time of the year.

You can see what our finished page looks like in the image below. You can also watch John Muir Laws’ video starting at 21:35. If you have time, I recommend the entire video. There’s a lot of interesting information about seasons and different ways of measuring distance. (There’s even a section on the usefulness of trigonometry and how it increases the neuroplasticity of the brain.)

Draw a scaled view of your horizon.

Use a compass to place the notable features at the correct degree. Your map will be more accurate if you use true north instead of magnetic north. (Use the instructions for finding true north in the next section.) First, begin by drawing whatever object is due north. This could be a telephone pole, a house, a tree, or anything else you see. Work across the paper adding in major landmarks, until you get around full circle.

For small children, you could simplify this. Find north using a compass. Ask, “What is north of you? What’s straight behind you? What is to the left? What’s to your right?” Add these in at the appropriate places. Don’t get too bogged down with exact degrees.

We live in a very hilly area, so this was difficult, but we just did our best and tried not to stress about the details. We also made the mistake of standing right next to the house as we were making the landscape, so I had to send my son on the roof to finish it off.

Keep track of the sun’s position throughout the day of the spring equinox, and record it on your paper.

You can track the sun’s direction in degrees by lining up a compass with the shadow a vertical stick casts along the ground. Again, if you are using true north, add or subtract the declination for your area. Use this angle to know where to locate the sun from left to right on the page.

You can track it’s height in degrees using the one potato, two potato method when it’s close to the horizon. When it’s higher, You can use a bit of trigonometry. Laws explains how on his site. (Don’t forget trig is good for your brain.) If this seems like a lot of work, he’s also included a handy calculator. All you need is the height of the stick and the length of its shadow. Scroll down below the video until you reach the two boxes where you can enter these two measurements. Press enter, and voila, you’ll have the height of the sun in degrees.

If this sounds complicated, there’s an easier way.

The easiest way to track its height and direction is by using the sky diagram in Activity 3. This is the option we chose. Print out the correct diagram of the four mentioned in Activity 3, step one (found on Laws’ website). I don’t think Laws mentioned this as an option, but if you track the shadow cast by a small toothpick secured in the center of the chart, the degrees are printed right on the chart. This sun tracking activity would be very interesting to do on its own if you’re looking for a slightly simpler activity.

We marked the sun’s location throughout the day at one hour intervals. By the end of the day, we had a handy chart that showed the direction and height the sun was at each hour.

We were then able to take this information and easily transfer it over to our 360 degree landscape.

Tracking the sun’s movements on the spring equinox was a very rewarding experience, and I’m looking forward to comparing this information with the information we collect on the summer solstice. You could do this activity again at the autumn equinox and at the solstices and compare the data.

However, if all this seems overwhelming, just spend part of the day enjoying nature and observing what plants and animals are doing at this time of year.

Are you looking for more nature activities? You may be interested in my monthly nature calendars and studies.