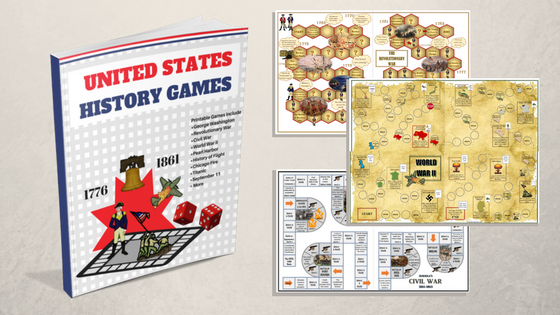 Make learning fun with these printable history games.  Your students won’t even know they’re learning!  Contains over a dozen games that can be printed out and used to enhance your study of United States History.

You may order here on my website or on Teachers Pay Teachers.

*This is a digital PDF download.  No physical product will be shipped.

We absolutely love adding in games (of any kind) to our homeschool studies. Board games, card games, dice games, printable games, we love them all. This has been a perfect addition to our game collection and highly recommend this printable to anyone who enjoys learning through play. ~Heather C.

My boys and I have had so much fun with this game!!!! I cannot count how many times we have played it, but no one gets any answers wrong anymore. They even invented the rule that you have to play it forward and back again before you win.. thank you! ~Lori C. on the President’s Game

This was a hit with my students! ~Nancy D. on the Civil War Game

Excited to use this as a review.  Great resource!!!! ~Stephanie S. on the Civil War Game

Perfect to use in addition to my unit!  ~Maria C.

Perfect for my little pilot! We are using it now and will be including it as part of an upcoming unit study on aviation at GypsyRoadSchool.blogspot.com. Great game! ~Holly J on History of Flight Game.

This was a fun game that helped spice up our homeschool day. Quick and easy to print and assemble. We all learned new things about the Civil War while playing this game together.  ~Guest

This is a board game to learn more about George Washington, the office of the presidency, and the lives of other presidents.

It includes a fun board game following the life of George Washington and forty-five question cards on the office of the president and on the lives of most of the United States presidents up to Donald Trump.

The questions are multiple choice so all ages can play, but if your students find this too easy, have the students answer the questions without giving the choices first.

Goal: The goal of the game is to collect the most battle cards by the time you reach the end.

The questions in this game are divided into four main categories. Each category has questions relating to “Who”, “When,” or “Why”. The Who and When questions are multiple choice. They Why questions are open-ended. The goal of the game is to collect sets of Who, When and Why questions.

This is a simple “Chutes and Ladders” type of game.

The questions in this game are divided into four main categories.  The questions include the following topics: The Boston Molasses Flood, The Children’s Blizzard, The Titanic, The Henryville Tornado, and the Japanese Tsunami.

The game was made to correlate with Lauren Tarshis’ book I Survived: Five Epic Disasters and would make a great addition to the study of this book.

Hurricane Katrina: Race to the Rescue

The game has three different paths which cover the following rescue efforts.

Most of my games work well with Lauren Tarshis’ I Survived series and can be used along with her books or on their own!

I’m finishing up the July nature study and the p

We found the perfect rock for a bee drinking stati

Sometimes when you have a garden, the question cha

We were doing our insect scavenger hunt and I was

I gave my daughter the job of painting strawberry

The more I learn about the insects we're surrounde