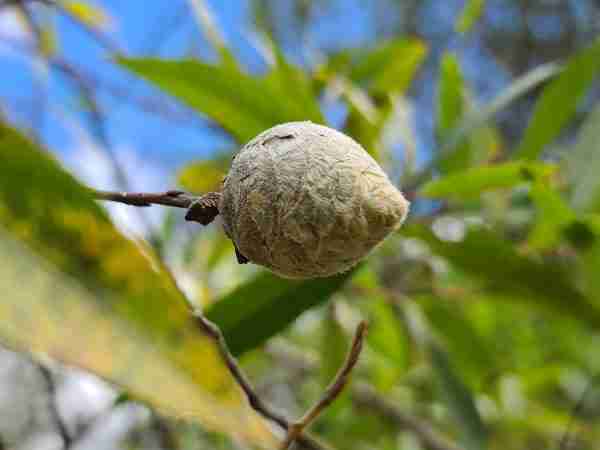 October is a wonderful time to be exploring nature here.  We’ve been having lovely weather and beautiful fall colors. I thought I’d share some of our October nature study highlights. Some of them were on the October nature calendar. Some we just came across because we were outside with our eyes open to find something interesting.

I’ve been wondering all summer what the pine cone shaped growths were on the willows by the pond.

We found out that they were pine cone galls made by the gall gnat midge. The gnat lays an egg in the bud of a willow, which causes it to form a little home for the tiny larva where it will overwinter. I would have never thought of it since they look just like tiny pine cones (especially when they’re older). My daughter insisted we open one to see the larva inside. Then she carefully closed it up again and tucked it somewhere safe. I love her tender heart.

We found red berries on the yew tree earlier this month. We’ve lived here for many years, and I’ve never noticed berries on the yew, probably because it’s not close to the house and there aren’t very many. This prompted us to learn about yews. They have male and female trees. The female trees produce these red berries containing a single seed. They attract birds and so help spread the seeds. The male tree produces tiny pinecones which produce pollen.

We caught an Eastern Newt in our fish trap. We found out that this is the adult form of the red eft. Eastern Newts are known for their complex life cycles. They begin their life as gilled larvae in the water. After three months, they leave their home and live as juveniles (red efts) on land for one to three years. You’ve probably seen one. Then they return to the water to lay eggs and begin the cycle again. As adults, they grow a large tail fin that equips them for their aquatic life.

We were excited to see one, since red efts are on the nature calendar this month, but catching an adult in a trap was not something we were aiming for. (The picture here isn’t the clearest, because I didn’t think of taking one until the ground around it was too soggy for me to get close. I did end up sinking a bit before I decided I’d rather stay dry.)

We made leaf predictions about when leaves would fall.  We tied strings around them and recorded the date, what they looked like, and when we thought they would fall off.

We’ve also been studying woolly bear caterpillars this month. We’ve found quite a few especially on the road. At this time of year, woolly bears are looking for a warm place to curl up and spend the winter. When spring comes, they’ll spin a cocoon, turn into an Isabella Tiger Moth, lay eggs, and begin their life cycle over. They go through instar stages and molt just like other caterpillars. For some reason, I have a hard time picturing a woolly bear molting.

We also found a few other kinds of fuzzy caterpillars in the leaf litter. I think the first one is a Spotted Tussock Moth although I couldn’t find an exact match. The second one is a Hickory Tussock Moth.

While visiting the milkweed patch, we came across a group of milkweed bugs. I had no idea what the different stages of their life cycle looked like before this.

These are just a few of the things we discovered this month. Sometimes it can be hard to get outside, but once we’re outside, we love it and we always learn something new. There’s so much to discover in Creation that we’ll never run out of things to explore.

What’s one fun discovery you’ve made lately in nature?