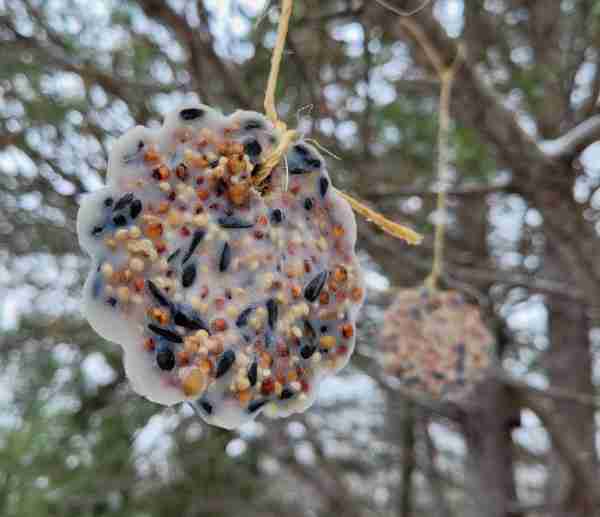 A Fun Winter Activity to Attract the Birds

Feeding birds during the winter is one way to bring nature closer to your home. These birdseed ornaments will be a big hit with the winter birds who need extra calories to keep them warm. They’re also a great activity to do with kids. They can practice mixing and scooping and pouring. It’s a bit like cooking, but for the birds.

I opted to make mine out of just suet and birdseed, but I’ll give you some other suggestions later, as well. I usually save the hamburger grease when I fry hamburger and keep it in the freezer until it’s cold enough outside to make these. In fall and winter, we often eat a lot of venison so I know I won’t be getting any fat during that time.

First, we melted the fat and added birdseed until it was the right consistency. We started with two cups of fat, which was a lot more than we needed for the ornaments, so I made a suet ring with the extra birdseed mixture.

We placed sections of straw into the mixture to make holes to hang them with later. I didn’t take a photo when we were doing this, but here’s one from after they were set. If you decide to make holes, make sure they’re far enough in the middle of the ornaments, so they won’t break as soon as the birds start feeding. I think the heart one will last well. The star ornament looks like it will fall apart right away, and we actually ended up putting that one on the bird feeder. We made that one when the mixture was pretty warm yet, so a lot of the fat just ran out.

Then, we put them in the fridge to chill, but you could put them outside as well. After they were solid, we popped them out of the silicon forms. They came out easily and it was fun for my daughter to do. I had to run a knife around the edge of the metal cookie cutters, but they popped out without much trouble as well.

We added twine and hung them outside on a pine tree by the window.

It didn’t take long for the birds to find them. So far, we’ve attracted chickadees, tufted titmice, and nuthatches. In past years when we hung out suet rings, we’ve had woodpeckers, too, so I’m waiting for those to show up.

If you don’t have suet, here’s a gelatin birdseed ornament recipe you could try.

What kind of birds do you see in winter at your feeders?