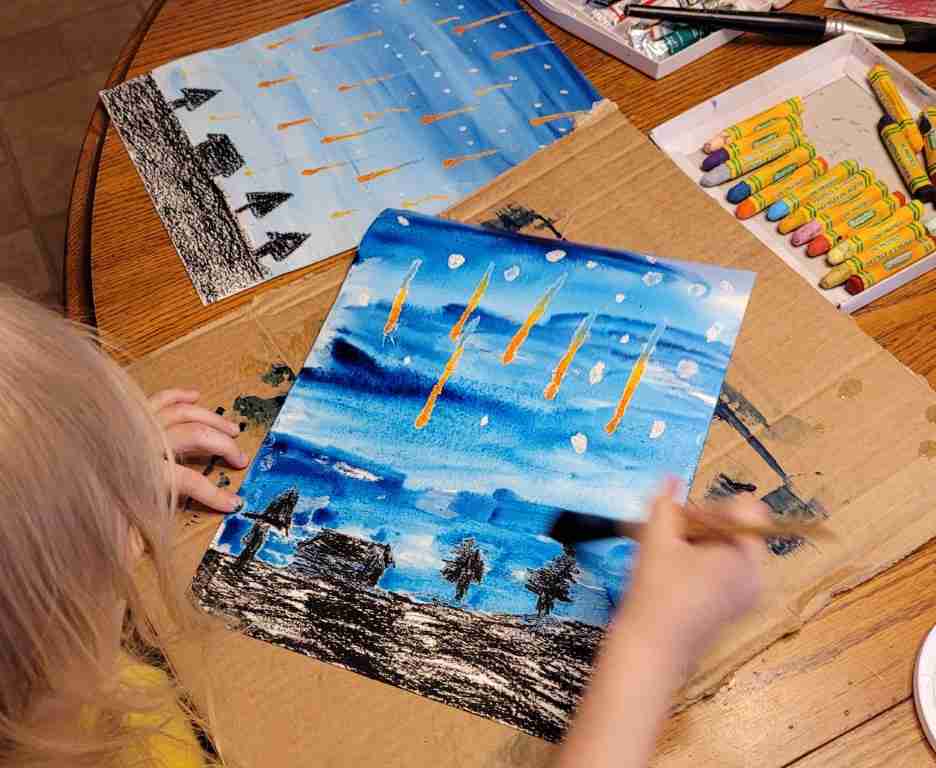 We are always excited when meteor showers are mentioned on the monthly nature calendars. I’ve put together some fun meteor shower resources and an art project that you can use to explore this topic with your children.

One thing that can keep us from watching meteor showers is that they usually involve late nights or early mornings. This will probably be harder for you than for your children, however, I think you’ll find it’s worth the effort.

When we lived in Africa and my boys were 2, 5, 7, and 9, I woke them up in the middle of the night to take them outside. I remember trying to go quietly as to not wake the 2-year-old, but he woke up as well (they all shared a room) and wanted to come along. A few years later, I was going through some clothes, and he got all excited when he saw an old shirt of his. “That’s the shirt! That’s the shirt I was wearing when we went out to look at the stars!” I was surprised that he even remembered it. We didn’t even see any shooting stars that night, but it’s one of his earliest memories.

First, you may want to explain what causes a meteor showers. Meteor showers are caused when the earth passes through the debris left by a comet. Comets are huge bodies of ice, dust, and rocks that circle the sun in highly elliptical orbits. As they near the sun, they begin to melt a little. This causes parts of the rock to loosen and fall off. So, even though some comets only approach Earth many years apart, every year the earth passes through the field of loose particles left behind when the comet passed Earth. As the particles come in contact with the earth’s atmosphere, they burn up, leaving a trail of light.

Here are two videos that may be helpful.

You can do this activity either in anticipation of a meteor shower or after you’ve watched one.

The meteor shower art project uses watercolor paints and oil pastels. These two mediums are probably my favorite combination for children’s art. The “magical effect” produced by using watercolor over the pastels is always a hit.

You will need the following:

First, lightly draw a landscape across the bottom with a pencil. We held our paper vertically so we would have more room for the sky. You could also cut your landscape out of black construction paper. We waited to color it in with the oil pastels until after we drew the comets and stars, so that the black oil pastel wouldn’t smudge.

Then, we used the oil pastels to draw comets. We used orange, yellow, and blue for the comets. We also drew some stars with white.

This painting by Edmund Weiß was a helpful reference.

Then we painted the sky with the blue watercolor paint. We wet the paper before we began. My idea was to add a thick swath of blue watercolor at the top and then drag the color down the page, making the top of the sky darker, and the bottom lighter, but I probably didn’t explain the concept well enough.

I think the paintings turned out lovely anyway.

My daughter enjoyed this art project so much that she wanted to do it twice. The second time she insisted we put figures in the grass watching the meteor shower.

Supplemental ideas for the Perseids:

Supplemental ideas for the Lyrids:

See EarthSky for everything you need to know about the Lyrid meteor shower. The Lyrid meteor shower is one of the oldest known meteor showers. The ancient Chinese mentioned observing it almost 3,000 years ago in the year 687 B.C. The Lyrids are caused by the debris from the comet Thatcher. This comet was discovered when it last approached earth in 1861 by A.E. Thatcher, an amateur astronomer from New York.

Here are a few books on comets and stars you might want to read. I had a hard time finding one specifically on meteor showers, so if you have a suggestion, I’d love to hear it.

I’ll close with this quote from EarthSky, “Meteor showers are like fishing. You go. You enjoy the night air and maybe the company of friends. Sometimes you catch something.”

I hope you’ve enjoyed these meteor shower activities. If you’d like more seasonal nature activities tied in with books, art, and poetry, check out my monthly nature subscriptions.