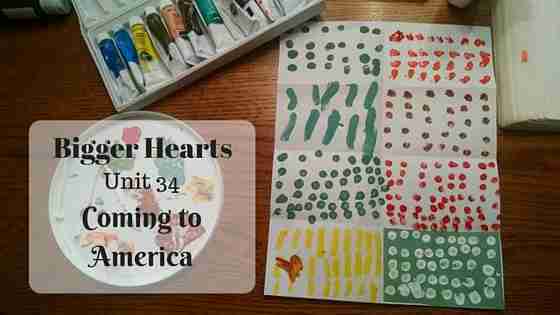 This was our last week in Bigger Hearts for His Glory.  My other three boys are almost done with their guides, too, and we did standardized testing with them this past week.  I also finished up a website that I’ve been working on where we sell building planks.   Because of this, the last week took more than a week, but we’re finally done except for the read-aloud.

We read about the Vietnam War in Journeys in Time.  We followed one family’s journey who fled Vietnam after the war and finally made their way to freedom in the United States.  To remember the freedom many immigrants found in our country, Kevin copied the poem “The New Colossus” which is found on the pedestal of The Statue of Liberty.  Then he decorated it with a green crown.

We also read about a migrant family who traveled throughout the United States helping harvest different crops.  For Artistic Expression, Kevin made a “field” split up into eight sections.  In each section we painted different crops.  We were supposed to use finger paint for this, but we used acrylic paint and cotton swabs.  Little Sister helped out with this, too.  (This activity was supposed to be done on a light green piece of paper, but I didn’t realize it until we got to the white cotton field at the end, so I just taped on some green paper in that section so the cotton would show up.)

We finished reading Thomas A. Edison and did some fun experiments.  In one experiment we saw how carbon dioxide is used to put out fires.  We put baking soda and vinegar in a jar, put a cap on it until the mixture stopped bubbling, and then lit a match and held it over the open jar.  We did this many times and were surprised how long the effect lasted.  Finally, we decided to test if a plain jar would do the same thing, but the match stayed burning even after we dropped it into the jar.

We found a bird’s nest out in one of our bushes last week and were excited to see that there were four eggs in it.  This morning we looked up how long it takes sparrow eggs to incubate and then how long it takes them to fledge.  We were surprised when we went to check on them after breakfast that they had already hatched and the boys have enjoyed watching the mama and daddy bird bring food for their little ones.  Even though, the nest is close to the ground, the birds did a great job of hiding their nest so it’s really hard to observe the little ones feed.

Our poem for the week was “I Am Only One” by Edward Everett Hale and the character trait was the fear of the Lord.

We really enjoyed our year with Bigger Hearts for His Glory and are already looking forward to Preparing Hearts next year.  I’ve already gone through this guide with two of my older boys and we really enjoyed it.

Previous Post: « Bigger Hearts For His Glory- Unit 33
Next Post: Learning Made Fun- The Elements by Theodore Gray »

The golden-rod is yellow; The corn is turning brow

I somehow missed I was planting pole beans, until

What if God put butterflies on this world because

The September calendar is available now! If you're

I made this quick pencil holder for my daughter wh

We spent some time this morning journaling about o