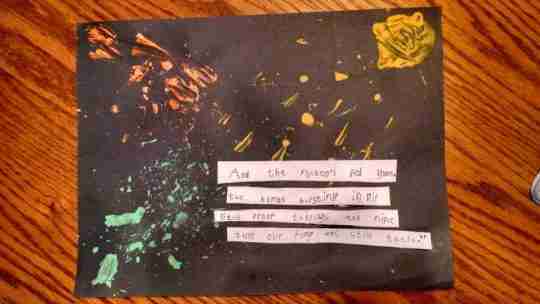 This week in Bigger Hearts for His Glory, we learned about William Henry Harrison and Tecumseh.  These two leaders fought against each other several times.  First, they fought in the war between the Indians and the settlers, and later they fought again in the war between the British and Americans.  We discussed the Indians’ and the settlers’ side of the war and what their reasons were for both wanting the land.  We also learned about Captain Lawrence and how he fought during the War of 1812.  He was the one who made the line, “Don’t give up the ship” famous.

We did a history activity where we made a grid and practiced finding locations on the grid using the coordinates. This week we also read about Francis Scott Key and the writing of “The Star Spangled Banner.”  For artistic expression Kevin made a painting that depicted fireworks and added some of the words to “The Star Spangled Banner.”  We were supposed to drip some paint in each of the corners and then blow the paint across the painting with a straw. This was supposed to look like bombs bursting in the air. I have to admit this did not work out as planned, and I almost gave up, but then I decided Kevin could use the straw to make streaks and we also put some paint directly into the straw and then blow on the straw and that worked a little better.  I thought it ended up looking fairly good at the end. In Science we talked about how you could measure things if you didn’t have a ruler or a yardstick.  We discussed how pioneers used their hands to measure the height of horses, or the length from their fingertips to their nose to measure fabric.  We also learned that often the height of a person equals the width of their spread out arms, so you can use that as a measurement if you know your height.  We checked if this was true with some of the boys, and it was close, but not exactly the same.

In A Pioneer Sampler we read about tapping maple trees, and Kevin made a notebook page showing the layers of a tree trunk. Our poem this week was “Barclay of Ury” by John Greenleaf Whittier.  We studied rhyme, meter, and meaning using the poem.  Our hymn for the week was “Eternal Father, Strong to Save.”