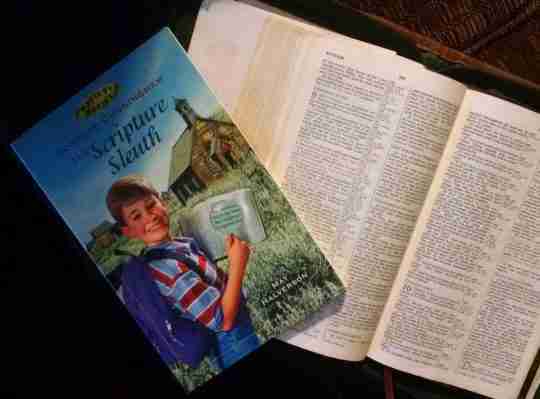 This week in Bigger Hearts for His Glory we studied Daniel Boone.  We read about his adventurous frontier life, and how he helped settle Kentucky.  We read about the time he was captured by the Indians and then later escaped.  We learned how he once evaded some Indians that were tracking him by swinging from a grapevine to avoid leaving tracks.

For art, Kevin made a painting of a tree using watercolors. He used a paper towel to dab paint on a piece of paper for the trunk and leaves.  Then he made a Daniel Boone figure and made him swing from a rope that was supposed to resemble a grape vine. We also learned about how Daniel Boone’s daughter Jemima and two of her friends were captured by the Indians, and how Daniel Boone and some of his friends rescued them.  For the history activity I was supposed to leave a trail made of bits of paper (like Jemima left a trail for the rescuers to follow), and Kevin was supposed  to find the person hidden at the end.  The boys had a lot of fun doing this and they all got involved.

Kevin also made a history notebook page about Daniel Boone and added him to our timeline.  We used the activity page found on the Bigger Hearts Facebook page. In science, we have continued studying One Small Square: Woods.  Kevin made a diagram of a root tip, labeled the different parts, and added it to his science notebook.   You can see that he needs to learn about how to make a well-balanced notebook page, but he did it completely by himself, so I thought he did a good job. We also studied pollination and how bees help to pollinate flowers.  We did an experiment with different colors of jello and a Q-tip showing how insects carry pollen from one flower to another.  The jello was a bit hard to see so maybe we should have chosen something more brightly colored.

In English we are studying pronouns.  We are using Rod and Staff English, but a couple years ago I made some worksheets for Kevin’s older brother for some of the lessons. We’ve reached the part where we have worksheets so we are doing that for a change of pace. 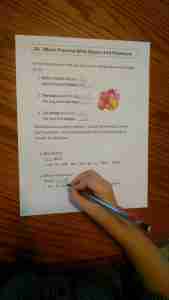 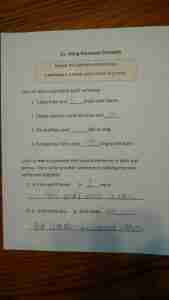 The poem for the week was Under the Trees by Richard Henry Stoddard.  Our character trait was endurance.

We also started a new genre for story time- the mystery genre.  To introduce the genre, I was supposed to hide something, and then give Kevin clues to help him find it.  Of course, I couldn’t resist getting older brother involved in this.

For a new book, we started reading Scripture Sleuth.

Kevin enjoyed this book so much, he asked if he could read ahead.  I said he could, because we have two books in this series.  He read the first book in one day.  It was neat to see him sitting there on the couch with the Bible beside him as he looked up the answers. It was also interesting because I started reading these same books to him last year and he didn’t seem very interested, so we went on to something else.  I was also excited to see that there are three more books in this series, because I’m always on the look-out for good books for birthdays.  I’m not sure I’ll be able to wait that long, though.