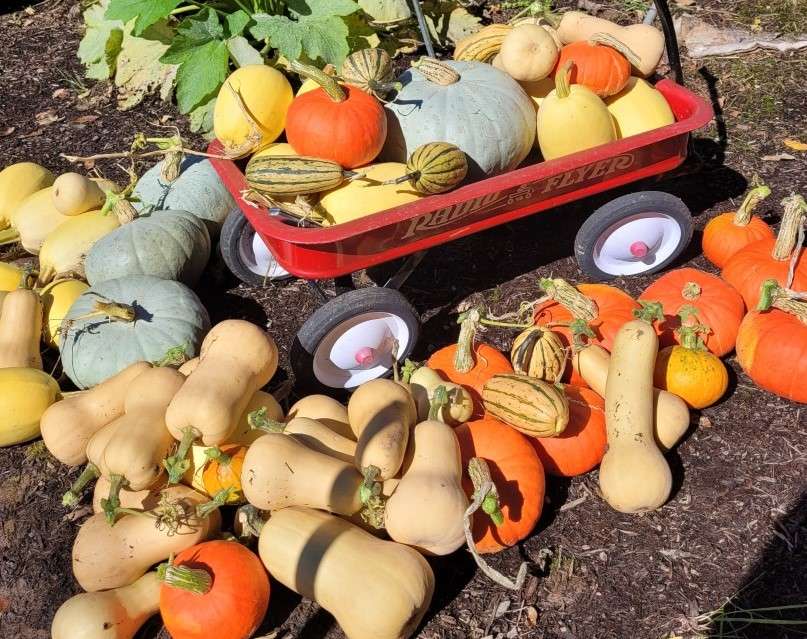 I’ve been hearing a lot about food security lately, and while I can’t predict what the future holds, it makes sense to be more independent in the way we acquire our food. If you’re trying to grow a lot of calories, winter squash is at the top of the list. In Carol Deppe’s book The Resilient Gardener, she lists squash as one of her top crops that “you need to survive and thrive,” along with potatoes, corn, dried beans, and eggs.

Not only is it healthier to be able to grow your own food, there’s also a sense of satisfaction that comes from taking a few seeds and turning them into a meal (or many meals). If you aren’t in a situation where you can grow your own food (most of us, with some imagination, can at least do a little), consider supporting local growers by buying produce throughout the season or in bulk at harvest time.

Here are the varieties of squash we harvested this year, many of which Deppe mentions in her book. We had a great squash year, and I’m thankful “for the blessings of the fields, for the stores the garden yields.”

You can easily recognize Butternut by its distinctive shape. The seedless neck is good for slicing and frying. Butternut should have a curing time of a few months so it makes it perfect for pumpkin pie at Thanksgiving.

Sweet Meat is a large blue squash and is a good keeper. It also needs to cure for several months, so I’ll wait until mid-winter to try it. Carol Deppe says that for best taste, you might want to cure it for six months, so this is serious slow food. She also recommends it as the top squash for committed homesteaders. Oregon Homestead is the variety she bred herself from the original Sweet Meat strain.

Delicata is a small, oval, striped squash. You don’t need to cure Delicata for long (one to two weeks) so you can eat it almost right away. It doesn’t last as long as Sweet Meat and, according to Deppe, is best before the end of December. One advantage of delicata is that you don’t need to peel it. I like it sliced and fried on a pan or drizzled with oil and baked on a sheet in the oven.

Sunshine is the only squash I grew that is a hybrid. It ripens quickly and so is good for shorter growing seasons. It stores well, but should be eaten by January, as well. It’s a kabocha squash with a fine-textured, sweet flesh. Many people cut it in slices with the skin on and bake in the oven. I like the bright orange pops of color it gives to my squash patch.

Spaghetti squash actually doesn’t fit in well with the others, because it is low in calories, but I like to grow it for the spaghetti-like strands. It is the base of an old family recipe where you layer it in a pan with sliced tomatoes, seasonings, bacon, and mozzarella cheese.

Here are some other recipes you can try.

I’ve been reading quite a bit on seed saving, because if you’re serious about self-reliance, it’s good to know something about how to save your own seeds. There are three main squash species that are grown in the United States: Cucurbita maxima, C. pepo, and C. moschata. Since these three species do not cross pollinate (according to most sources), you can save seeds if you are only growing one of each type. I had a hard time limiting the squash varieties I grew, so I won’t be able to do a lot of seed saving.

Delicata and spaghetti squash are C. pepo, and Sweet Meat-Oregon Homestead and Sunshine F1 are both C. maxima, so I can’t save seeds from any of those and expect them to grow true to the parent plant. Not to mention that Sunshine F1 is a hybrid to begin with and won’t grow true to seed.

Butternut is C. moschata making it the only squash I can save seeds from. But I can save several year’s worth of that kind.

Next year, I need to either limit my squash varieties or practice hand pollination. This might be a fun skill to add to my arsenal next year.

What are your favorite squash to grow?