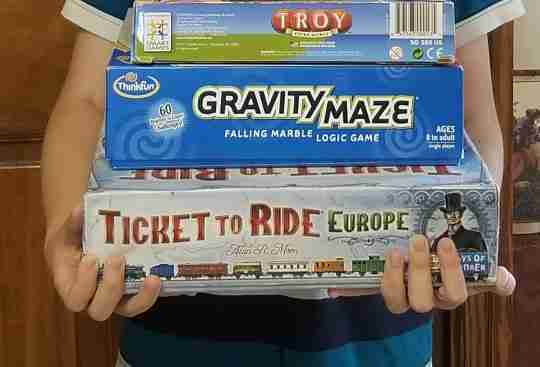 Through the years, we’ve really enjoyed using games in our homeschooling.  There are so many games available that work perfectly to teach a variety of skills and subjects- math, spelling, language, team skills, strategy, logic, and the list could go on.  Of course, there are Scrabble and Pictionary which are great for spelling and vocabulary.  Uno is probably one of the best for teaching young children colors and numbers.  Here are some others you’ll want to consider.

These are games that kids can play alone.  They teach logic and the ability to analyze and think several steps ahead.  They are handy when you’re teaching multiple children –especially children that aren’t independent in their school work yet.  You can schedule in blocks of time for one of your children to play a game, while you work with the other one.  Rotate the games by day or week to keep it more interesting for your child.  We have lots of these on hand and they’ve been our go-to for birthday gifts for many years.

Camouflage was one of our first logic game purchases, and it was a big hit.  Now, over ten years later, it’s still being enjoyed by our younger children.  As with most games like this there are different levels, so while the four-year-old may be able to do the simple level with some help, the most difficult level is a challenge for any adult.

In Tantrix you need to solve the puzzles by making sure only matching colors are touching each other.  It includes twelve puzzles with varying levels of difficulty.  My youngest son, who devours puzzles, worked hard at this and was able to solve them all just after he had turned six, but I challenge any of you to do the same.

Rush Hour is the classic traffic jam logic game and one of the all-time most popular STEM toys and gifts for boys and girls.  Playing through the challenges builds reasoning and planning skills and provides a great learning experience for young players.

Can you solve the chess challenge given you?  Solitaire Chess comes with 60 challenges that become increasingly difficult as you play through them.  A great game for a chess lover who might not always be able to find a willing partner.

Place the walls in a such a way so that the enemy is without and your men are safe within.

Escape out of the ancient temple by sliding the moveable pieces, but don’t get eaten by the alligator.

Gravity Maze is a combination logic game, marble run, and STEM toy.  Place the blocks in such a way that the marble will roll down the correct passageways and come out the entrance.

My kids were first introduced to this game in a fellow missionary kid’s home in Africa.  Immediately, they knew what to request in the next flat rate box from friends at home.  This, along with IQ Blox and IQ Steps,  are great for trips or waiting rooms.  They are small enough to have tucked in a purse or diaper bag and have with you wherever you go.

Games are a wonderful way to increase spelling and language skills.  I’m sure you’re all familiar with Scrabble.  Royalty and Quiddler are two other word building games, but what sets them apart is that they’re card games.  In Royalty you have the option of stealing your opponents words if you can make a completely new word by adding at least one of your own cards.  I can’t believe that this game is so hard to find because it’s one of the best word games ever.  If you can find the 1996 version, that is really the one you want because the cards look the nicest (or is that just my opinion?)

Quiddler is a fun “short word game”.  In this game not necessarily the person with the largest vocabulary wins.  You get extra points for the longest word or the most words, so strategy can win out over vocabulary.  My sons can beat me at this, but only because they’ve honed their strategy powers by years of chess playing.

Wise and Otherwise is a new one for us and we’ve been really enjoying it.  You are given the beginning of an obscure proverb and you need to write a realistic ending.  Then all the endings are thrown together, along with the real one, and you have to chose which one is right.  Receive points for tricking others to vote for yours and receive points for guessing the right one.  This is a hilarious game that will have you really thinking as you try to come up with a proverb that will trick your opponents.

Dedicate an evening to playing this game or just chose one proverb as a fun break in your school day.  (The price of this game varies on Amazon, so you might want to check eBay as well.)

In Catch Phrase you try to get members on your team to say the word that appears on the small hand-held device.  Ingenuity wins the day with this game.  Be quick because if you’re caught holding the unit, the other team will win a point.

There are so many uses for Story Cubes.  You roll all 9 cubes to generate 9 random images and then use these to invent a story that starts with “Once upon a time…” and uses all 9 elements as part of your narrative.  Believe it or not, the 54 different images can be mixed in over ten million ways!  “Full instructions include several other ways to use the cubes to solve problems, break up writer’s block, enhance your imagination and heighten your ability to find unifying themes among the diverse images”

I have to admit that this is one game I haven’t played, but I’ve been looking at it for years.  After reading the reviews on Amazon, I’m even more tempted.  I have one son that would really benefit from having his imagination stretched with these cubes, and I know that my four-year-old daughter would love it.  They sound such like a fun way to develop language skills!

My sister recommended Codenames to us after playing it at a friend’s house.  You try to guess the secret agents (words) that are on your team.  Only the spymaster knows their identity.  He gives one word clues that try to link as many words together as possible.  A fun game that develops reasoning and language skills.

Ticket to Ride is a great family board game. It’s not too complicated for young kids to learn. My youngest son could play it when he was seven.

Have fun learning about the states in this game of quick observation and reflexes.  Can you find a state that borders Mississippi?  Or who has a state that’s closest to Arkansas?  Or how about one whose capital starts with an A.   The one who collects the most cards wins.

I was also going to recommend Ten Days in Africa and others in the series, but they seem to be a bit hard to find.  Maybe you’ll get lucky and find one at a garage sale if you keep your eyes open.

This was a favorite of my son for a long time.  It’s a great family game because it’s fun for all ages.

There are a lot of different Brain Boxes available.  Choose one that matches your child’s interests.  I gave one of my sons Inventions and one of them Nature.  My little girl loves Brain Box ABC and it’s a good activity for us to spend some one-on-one time together.

If you’re excited about the thought of adding games to your homeschool day, you could also print out one of the games in my shop and start today.  My Oregon Trail game can be played by one player as a solitaire game or it can be played by more than one player as a cooperative game. Roll a dice to see where the animals, raft, and sun are supposed to be placed and then make a path with the path cards from start to finish. The goal is to reach the end before winter while collecting enough points from “hunting” animals. Collect ten points and reach the end before winter sets in and you win! No two games are alike.

You might notice that I haven’t included any math games.  For some reason, even though I have a son that is obsessed with math, we don’t own that many math games.  His interest in math showed itself more as an interest in puzzles and logic games when he was younger.   Maybe I’ll do some research and post a list of math games separately since I know that there are a lot of them out there.

I’d love to hear what some of your favorite games are.  Let me know in the comments.

Do you want to add nature, beauty, art and poetry to your children’s days? In the early years, children learn best by hands-on experience. Words mean little to those who have not yet experienced the sights, sounds, smells, and feelings those words represent. Read More about “A Month in Nature”…

Sometimes our children are tempted to give up when things get hard, or when something is taking too long, or things are not working out the way they had planned (or insert any other difficulty here). Here are some incredible stories of children (and adults) who did not give up when faced with difficulties. […]