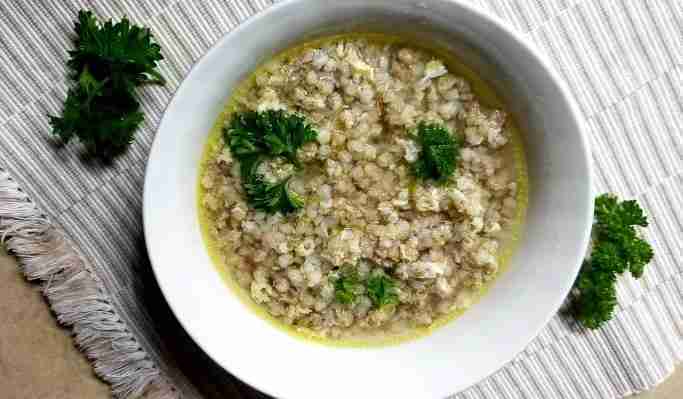 As I was growing up, buckwheat soup was a regular item on the menu. And it was never made with store-bought chicken broth.  Rather, it was made with home-made stock, usually from free-range chickens.

I always knew buckwheat was good for you.  After all, it was my Mom’s go-to when someone was sick.  But lately, I keep reading just how healthy buckwheat is for you.  I’ve seen it mentioned alongside other super grains such as amaranth and quinoa.

Here are some of the benefits of buckwheat.

I’ve also learned lately that Buckwheat is a distinctively Russian food which is not surprising since that’s where my ancestors settled before coming to America.  It’s gaining popularity in America, though, due to its health benefits.

How to Make Buckwheat soup

You might be wondering how to add this super-food to your diet.  That’s where buckwheat soup comes in.

Buckwheat soup is very simple to make and is quite possibly the best three-ingredient soup you’ve never tasted.  Ask my husband who says it is one of the best foods I’ve introduced to him.  And my five-year old is constantly asking me to make this healthy soup.

Start with 3 quarts of good chicken soup stock.  If at all possible, don’t use store-bought broth.  This would be just the thing to make with that bone broth you’ve been cooking up.  I season mine to taste with chicken soup base and salt.

Mix 2 cups of buckwheat with 4 eggs and allow to rest for 5 to 10 minutes.  You may also add chopped parsley to this mixture.  Traditionally, we used cracked buckwheat, but this is hard to find where I live.  I’ve started to use whole buckwheat groats.  The only difference is that I have to cook the soup longer. The only other way I remember eating it is a child was as a thick porridge with white sauce on top.  Maybe I’ll have to make that again soon.

Is buckwheat something you’ve ever eaten before?  What ways do you enjoy eating it?