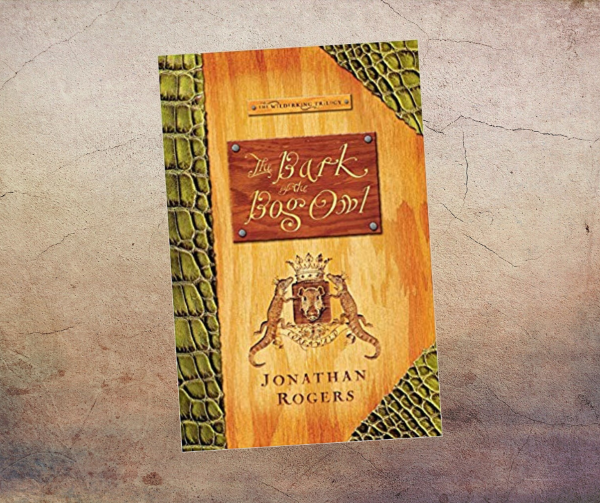 We recently listened to The Bark of the Bog Owl by Jonathan Rogers on a trip. The book is part one in the Wilderking Trilogy. After listening to it, we quickly ended up buying the rest of the series. It was a long trip, so it was a good thing we had a three-book series to occupy the hours.

The Bark of the Bog Owl is a loose retelling of the life of David. (Yes, we’re talking about the Biblical hero who slew Goliath.) The book contains the main elements of the well-known story. A shepherd boy is prophesied to become king. A giant defies the armies of this kingdom. And a jealous king is determined to put an end to this shepherd boy who is rising in favor with the people of the kingdom.

But the book is not just a retelling of the Biblical story. Jonathan Rogers tells his own story with unique characters and setting and surprising elements that are completely his own. So don’t go looking for point-by-point comparisons to the Biblical account. However, Aiden Errol, the prophesied Wilderking, has the same devotion to the one true God and feels the same indignation at the giant’s insults against his country as David.

The book helped me to see what it could have been like for David, who was a loyal subject of King Saul, when Samuel anointed him as the next king of Israel. I’m sure David faced many of the thoughts and questions that Aidan faced when he was anointed to be the Wilderking.

We enjoyed the audio version of these books. The narrator does a great job with the accents and the songs in the book. This is not surprising, since the book is narrated by the author himself.

The books are also available with Kindle Unlimited (a free 30 day trial is available) .

Previous Post: « Choosing Joy as a Homeschool Mom (Part 2)
Next Post: How to Turn Your Teen’s Interests into High School Credit »