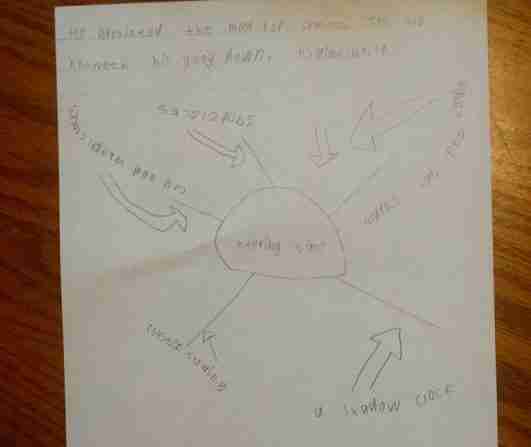 In this unit in Bigger Hearts for His Glory, we learned about Daniel Webster.  We saw how Daniel Webster learned how to serve others through his family’s example.  His family sacrificed to send him and his brother to college.  Later, Daniel payed his father’s debts.  He also once delivered a load of wood to a poor woman he caught stealing wood from his property.

Our character trait for the week was service, which tied in well with Daniel Webster’s life.  We also learned about other inventors.  They all worked hard to bring us the inventions we have today.

One of these men was Samuel Morse.  He worked together with two other men who helped him invent the telegraph.  Samuel Morse painted portraits of people to help support himself, so for Artistic Expression, Kevin painted a self-portrait.

We also read about the India Rubber Man- Charles Goodyear.  We learned how he was very poor and spent a lot of time trying to find a way to make better rubber.  The rubber of that time froze in winter and melted in summer!  We spent some time finding products around the house that were made of rubber.

For a history activity we were supposed to do an activity that involved making a grid and following coordinates.  Instead we played a game of Battleship.  This took much longer than the history activity would have, but it was fun and we had extra time. For History, Kevin also made a notebook page to remember the men who helped invent the telegraph. In Science, we discussed how the pioneers used different methods to tell time.  They did not need to know the time as accurately as we do today but they still needed to be able to tell when to eat meals, or how long to bake a cake.  They used the crow of a rooster, a shadow clock, marks cut into candles, sand clocks, or cog and wheel clocks to measure time.  Kevin made a notebook page showing the different ways.  We also marked the passage of time by tracing Kevin’s shadow at different times of the day.

Our poem for the week was Tomorrow’s Opportunity.  We discussed the poems rhyming pattern, meter and meaning.  For Storytime we finished up the genre nonfiction and we’re going to be starting humor next week.  I liked how when we discussed fact and opinion, the guide emphasized that nobody is perfect all the time except God so we can expect to see errors in books we read.

Thanks for joining us!  I hope you had a great week of learning.

Previous Post: « Bigger Hearts for His Glory- Unit 23
Next Post: Having a Martha Home the Mary Way {a maybe too-honest book review} »