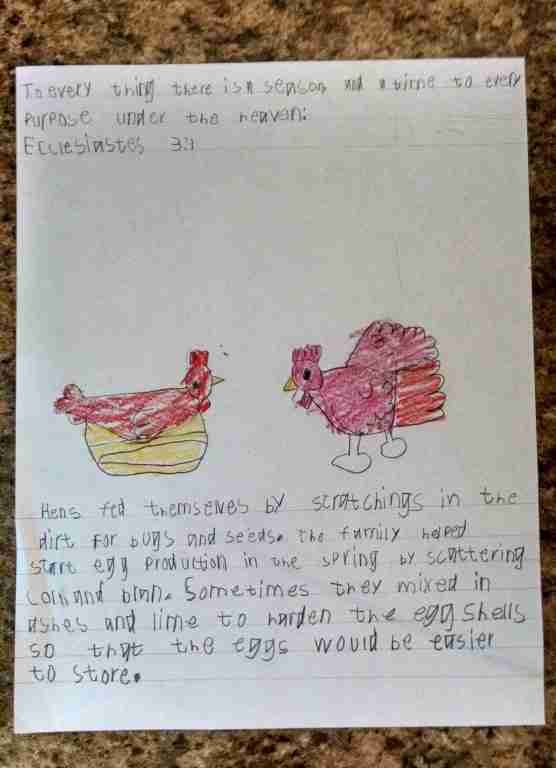 This week is going to be really short.  I’ll just touch on some of the highlights.

This week we learned about how Thomas Jefferson made the Louisiana Purchase.  We also read about the Lewis and Clark expedition.

Kevin made a map of the United States on the floor with building planks.  We were supposed to use masking tape, but for some reason we are always out of it.  Then he made the Mississippi and Missouri Rivers, so he could see the route that Lewis and Clark would have taken.  He also made a notebook page about Lewis and Clark and added them to his timeline.

For artistic expression, he made a 3-D star.  First, he decorated two stars with marker.  Then we made a slit in each star, and slid the stars into each other.  Kevin really liked this project and kept talking about it for the next few days.

For science we started a new book called A Pioneer Sampler.  It follows the life of a pioneer family who lived on a farm in the backwoods.  We learn about what life was like back then and how things were different.  After reading about how excited the family was over the first egg in spring, and about how Mom decided to make a pudding with it for supper, I told the boys it makes me appreciate the refrigerator full of eggs that we have.

Here’s the notebook page Kevin made when we were reading about the chickens.  I’m really pleased how he can copy much longer passages than he did at the beginning of the year, and it doesn’t take him nearly as long as it used to. We also did an experiment showing what a fire needs to keep burning.  We lit a candle and then covered it with a plate to show that fire needs both fuel and oxygen to burn.  (I really should have proofread his science sheet better.) Our poem for this week was “Open Range” by Kathryn and Byron Jackson.  We discussed why the authors chose the words they did and what mood they created.  We also reviewed some of the other poems we’ve studied.  I like to see the interest Kevin has taken in poetry through the short daily lessons.

Kevin finished up the Scripture Sleuth books on his own, so we started an Encyclopedia Brown book for story time.  We have a lot of those so there is no danger of running out before the mystery genre is over.

Like I said, this week is going to be pretty short.  I guess I didn’t take a lot of pictures.  Thanks for stopping by.