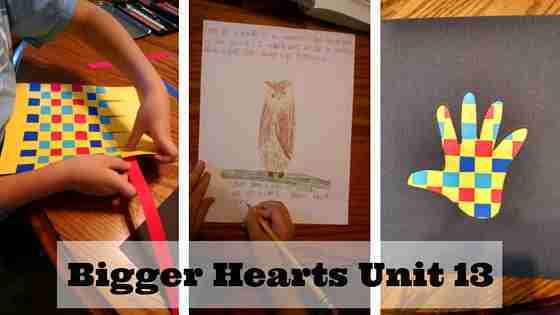 We just finished up Unit 13 in Heart of Dakota’s Bigger Hearts for His Glory.  This week we studied Marquette and Joliet, Washington, and Anthony Benezet.  We also studied the French and Indian War.

Anthony Benezet was a great and good man that spent his time  helping those around him.  To help remind us to give a helping hand to those around us, Kevin made a woven hand for art.

He wove strips of paper to make a colorful design.

Then we placed black paper with a cut-out hand over it.

In geography, Kevin studied landforms and he experimented with making different landforms in lemon pudding.  Of course, we got to eat the pudding afterward! We are still studying John Audobon.  I love how John’s father realized that his son would not be happy unless he could pursue his passion of drawing birds.  It was not what he had planned for his only son but he was wise enough to realize that fathers can not always plan what their sons will do.

We continued studying birds in science and Kevin made a notebook page about an owl.  We also discussed cuckoo birds and how they are different from other birds. He also made a vocabulary card and filed it with his other cards.  He also added Marquette and Benezet to his timeline.  I am happy to see that he is getting more independent with these activities. We started The Twenty-One Balloons for our read aloud for the fantasy genre.  We enjoyed the genre kick-off day where we discussed imaginary uses for common items.  It’s funny but we’ve had the book around for quite a while (I picked it up used somewhere.), but no one has read it.  As soon as I started reading it to my son, his older brother decided that he couldn’t wait to hear the end and is finishing it up this evening.

I hope you had a good week, too!