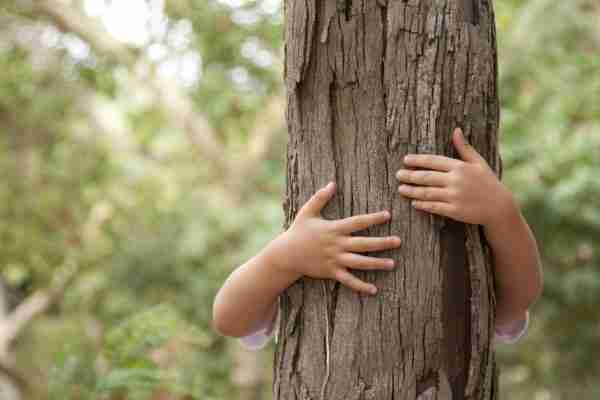 “Let’s go to the pond,” said my 5-year-old daughter. “We’re sure to find something interesting.”  So we headed out on a nature walk with no particular goal in mind but to see what we could find.

We passed underneath an oak tree as we headed down.  I asked my daughter if she knew that acorns came from oak trees.  I’m sure I’ve told her in the past, but I wasn’t sure if she remembered.  We hunted for the beginning of acorns on the tree. She was the first to find the tiny nut clusters.  As we continued on she grabbed an oak leaf and said, “We can learn about leaf veins from this.” And she traced the central vein with her finger to the end of the leaf and the side veins to the tip of each lobe.

We stopped under “our” wild apple tree that we’ve been observing over the last few months.  I boosted her up to her sitting place– a place where one of the main branches makes a sharp turn and forms a perfect seat for a little explorer.  We wondered why the ground was littered with fallen yellow leaves. Insect damage? A disease?  Or just normal for apple trees this time of year?  Two birds with yellow tail feathers flew from branch to branch and we looked to see if they had a nest in the tree or were just looking for bugs.

As we neared the pond we heard the call, or should I say the meow, of a bird.  “I think that’s a catbird,” I said (a rather obvious observation, but I felt accomplished none-the-less).  My daughter readily agreed, just before the catbird landed a few feet in front of us.  We gave each other silent high-fives at our “skilled” bird call identification skills.  We watched it join another catbird in the bushes and we looked for a nest, but couldn’t find one.

Then we came to the goal of our trip- the milkweed plants by the edge of the pond.  The purple flowers had given away to the beginnings of seed pods. We looked under the leaves for butterfly eggs, but all we found were snails.  There were numerous ants scurrying up and down the plants. I told my daughter that maybe they were looking for aphids to “milk”, much like humans milk cows. She giggled at the idea.

Then we found it.  The tiniest monarch caterpillar that I had ever seen.  We carefully picked the leaf it was on and carried it home with us– cradling it in our hands so we wouldn’t lose it.

After Our Nature Walk

I knew monarch caterpillar stages were called instars. That was as far as my knowledge went, so at home we looked up the stages and found out that a monarch caterpillar goes through five instar stages.  The five stages together last a total of 10 to 14 days. After each stage the growing caterpillar sheds its too-tight skin.

Of course, we wanted to know which stage this littlest of caterpillars was in. I quickly found a short video and I learned more about instar stages than I had ever heard in my life.  We concluded that our findling was probably in the first stage due to its size, black head, and the size of its tentacles. We placed it into a jar to watch this amazing transformation from instar to butterfly.

Then, we looked up “small orange and black butterfly.” Unfortunately, we found that wasn’t quite descriptive enough to identify the butterfly. I made a mental note to be more thorough on our observations next time.

Later as I thought over our walk, I was surprised at the amount of learning we had packed into one little nature walk.  As we gain knowledge about what to look for in the world around us, it makes our times in nature richer.  The little bits we’ve gained through our months in nature add up to increase our observation skills and our curiosity about what is happening in the plant and animal life we’re surrounded with. We’ve gained tools that allow us to observe and and ask questions.

If you’re just at the beginning of your nature walk journey, take heart. Each little thing you learn is a peg board for future knowledge and experiences. Just keep pressing on. You’ll be surprised where you’ll end up.