Books are a great way to learn more about history.  Here are some of our favorite World War II books.  The horrors committed during World War II are appalling and difficult to wrap our minds around.  However, I believe these stories show that there were always those who did their best to show compassion and courage in the face of evil.

The age ranges are taken from Amazon (even though some of their age ranges seem a bit random to me).  Keep in mind that read-alouds can often be done on a younger age level than recommended since the parent is doing the reading.  For example Sonlight (a popular literature based homeschool curriculum) recommends Twenty and Ten as a read-aloud for ages 5-7.  Of course, you want to be careful that the themes contained in a book are age-appropriate.

Twenty and Ten by Claire Bishop (Ages 10 and up)

Twenty French school children are given the task of hiding ten Jewish children.  A delightful book for young children.

This book is set during the German invasion of Holland.  Johanna is responsible for protecting the “Little Riders” from the Nazis.  Will she be able to keep her promise to her father?  Is it possible to overcome her hatred for the Germans and accept the friendship of the soldier living in their home?

A group of children work together to sneak gold out of Norway under the nose of the Nazi invaders.  A great WWII book for children.  Audiobook available here.

This book is set after WWII.  I Am David is about a young boy who escapes from a prison camp in Eastern Europe.  He has been shut away from the outside world for his whole life, so he knows nothing except prison life.  It was touching to watch David experience the world for the first time and the wonders it holds.

Marcel discovers his parents are part of the French Resistance when he comes across a secret message hidden inside a loaf of bread he’s delivering for them.

Candy Bombers takes place immediately after World War II in divided Berlin.  Young Erich has many reasons to resent the Americans’ presence in his city.  When an American sergeant tries to befriend him, will he cling to his bitterness or will he learn to forgive?   This is a period of time that I wasn’t very familiar with so I was glad for the opportunity to learn more about it.

This is the first in a three-part series.  If you have a Kindle or the Kindle app, all three books are available in one collection called Life Behind the Wall.   (The collection is only 99 cents at the writing of this post!)  The books have a Christian theme.

This is the first in a seven-book series. Tom, his dog Scout, and his friends meet many adventures in Nazi-occupied Holland.  The books portray Biblical values.  I found this excellent review of the Scout books here.

This is another story of resistance set in Holland.

When Franz Bedke and his family leave Germany because their secret work of hiding Jews is under suspicion, Franz is relieved to no longer be living in fear.  However, to Franz’s dismay, soon desperate Jews are finding their way to the Bedke’s new home in Poland.   During a surprise raid, Franz is captured along with Karl, a young Jewish boy.

This book is told from the unique viewpoint of a young girl who believes herself to be a staunch member of the Nazi youth group in her country.  What will she do when she discovers that her parents are hiding Jews behind her bedroom wall?  And what does her father mean when he says there is something more important than love?   (The book contains one or two instances of some language you might want to skip over if doing it as a read-aloud.)

This is the story of a young girl in Nazi-occupied Denmark.  She is sent on a dangerous mission to save the life of her best friend.

Anna and her family flee Germany when Anna’s father realizes that it is no longer a safe place for a Jew.  Anna and her brother go through many adjustments as they move from country to country looking for safety.

The Faithful Spy: Dietrich Bonhoeffer and the Plot to Kill Hitler (Ages 10-14)

The Boys in the Boat is about the American rowing team that went on to the 1936 Berlin Olympics.   The book gave a good glimpse into pre-WWII Germany and the deceptive front that Hitler tried to put on to trick the rest of the world into thinking that all was well in Germany.

Corrie ten Boom’s life of determination, faith, and forgiveness in the face of unimaginable brutality and hardship is a stunning testimony to the sustaining power of God.  For older children consider The Hiding Place.

Other Christian Heroes: Then & Now Biographies:

Dietrich Bonhoeffer: In the Midst of Wickedness

Heroes of History by Janet and Geoff Benge 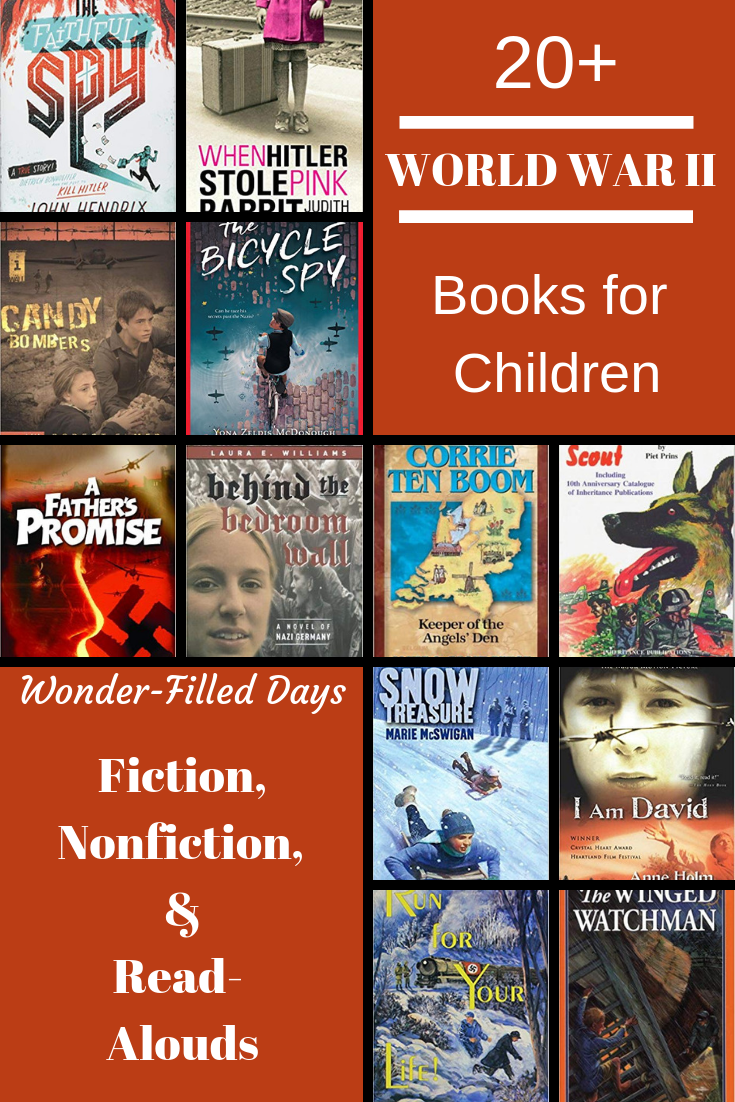